June 10, 2019
The S&P and Nasdaq were last to follow the lead of the Russell 2000, Dow and Semiconductor Index. It's now looking like respectable swing lows are in effect for all lead indices.

For the S&P there was a close above the 50-day MA in addition to the follow through breakout. Technicals returned net bullish, making the 52-week high of 2,954 as the next challenge for the index. 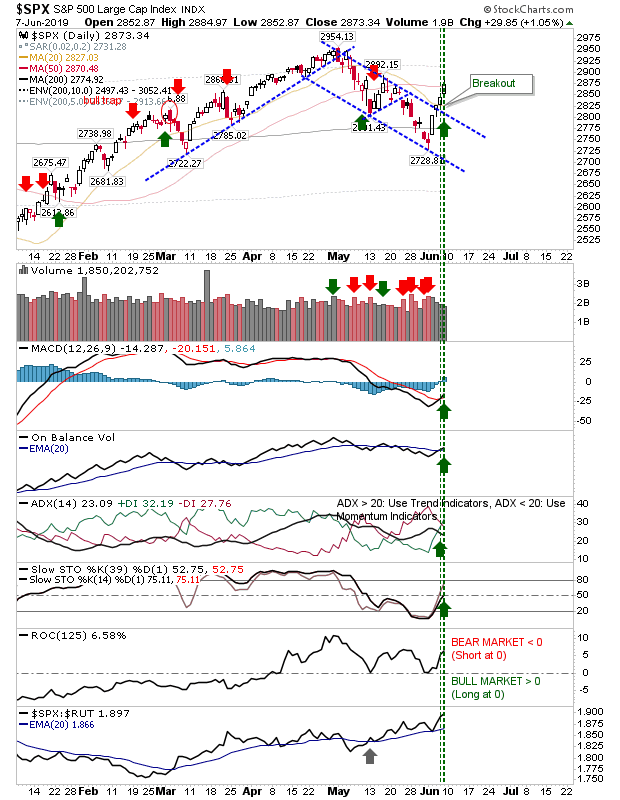 The Nasdaq cleared channel resistance and Friday offered a push above the 20-day MA. The index continues to underperform the S&P since May and it still has to clear its 50-day MA before it can think of challenging 52-week highs.  Upside volume has been light, although it was still enough to see a 'buy' trigger in On-Balance-Volume and also in the MACD. 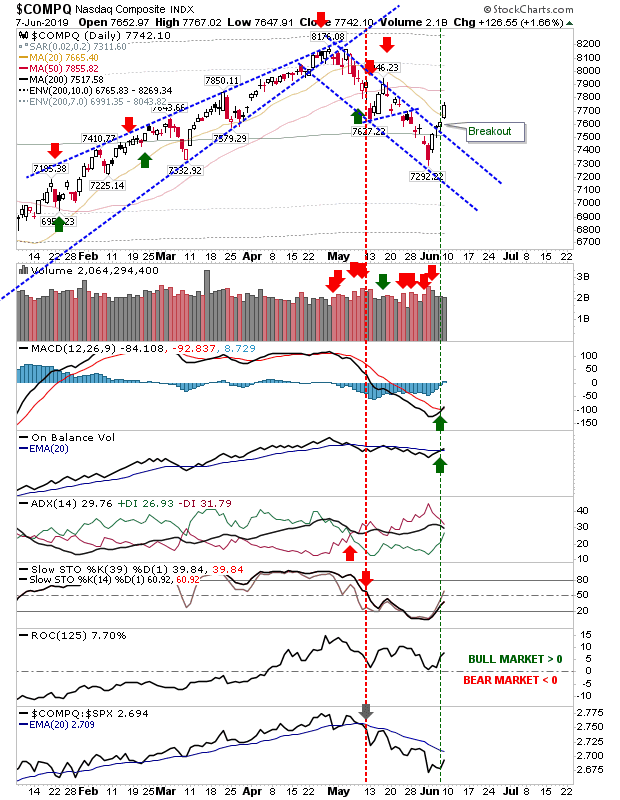 The Russell 2000, despite sneaking a breakout, managed to lose relative ground against the improving Nasdaq. However, the MACD has maintained trigger 'buy' and while the index is above its 20-day MA there is a momentum trade to take it to its 200-day MA (and 50-day MA). 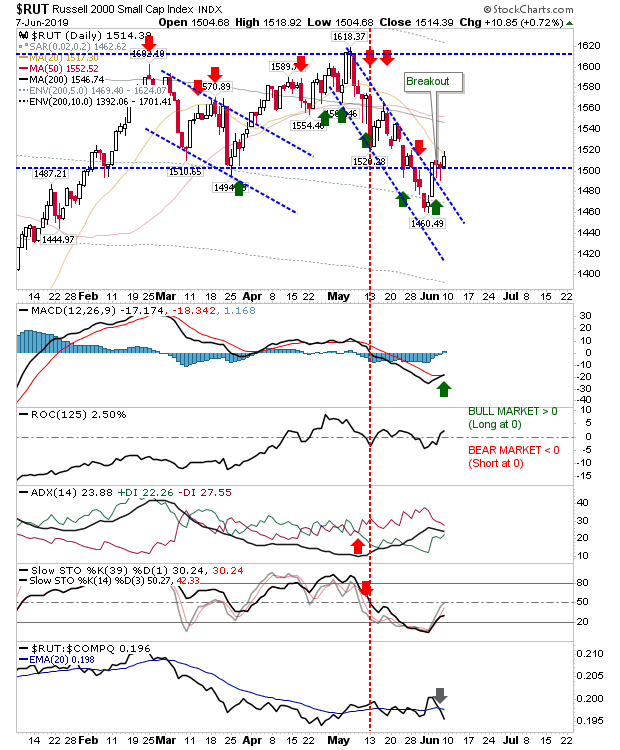 The Semiconductor Index managed a small gain but it was left out of the limelight by the actions of other indices. In relative terms, Semiconductors managed to make it back to the Nasdaq 100, although over the past week lost some relative ground to the aforementioned index. The recovery of the Semiconductor Index from the 200-day MA has slowed a little and there is still work to do before the ADX and Stochastics are bullish. 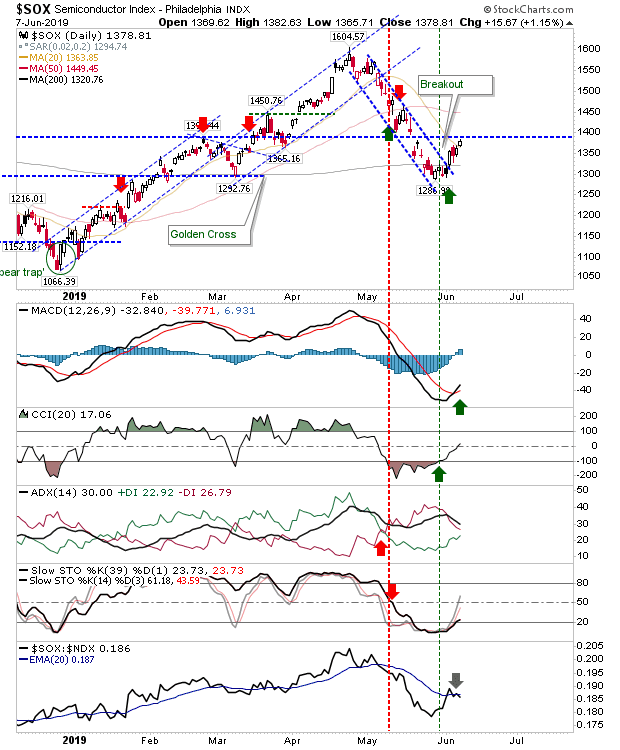 Of breadth metrics, one concern is the breakdown in support of the relationship between the Transports and Dow Jones Index (part of Dow Theory); this breakdown - part of a broader multi-year trend down - hasn't yet expressed itself with a secular decline in the Dow Jones Index as would be expected when economically sensitive Transport sector underperform. 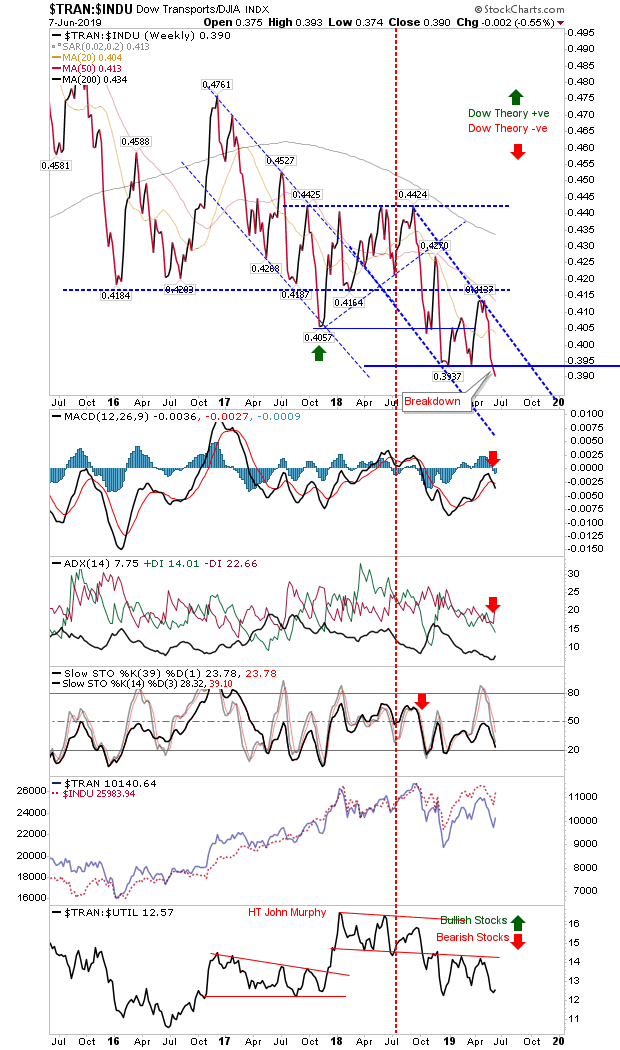 Tomorrow will be about firming up the swing lows and building the rally. Declines - when they come - will need to be brief and shallow. We haven't yet seen this test so be cautious on new positions.