Semiconductors Firm Up a Swing Low

September 16, 2018
There wasn't a whole lot to Friday's action but two indices which were struggling a little did benefit.

The Semiconductor Index gained 1% as it bounced strongly off the bullish 'morning star'. The consolidation triangle looks to be shifting to another pattern but resistance from triangle swing highs remains in effect and is the next challenge of the index.  Technicals are net bearish and relative performance, while recovering, hasn't yet undone the most recent 'sell' trigger. 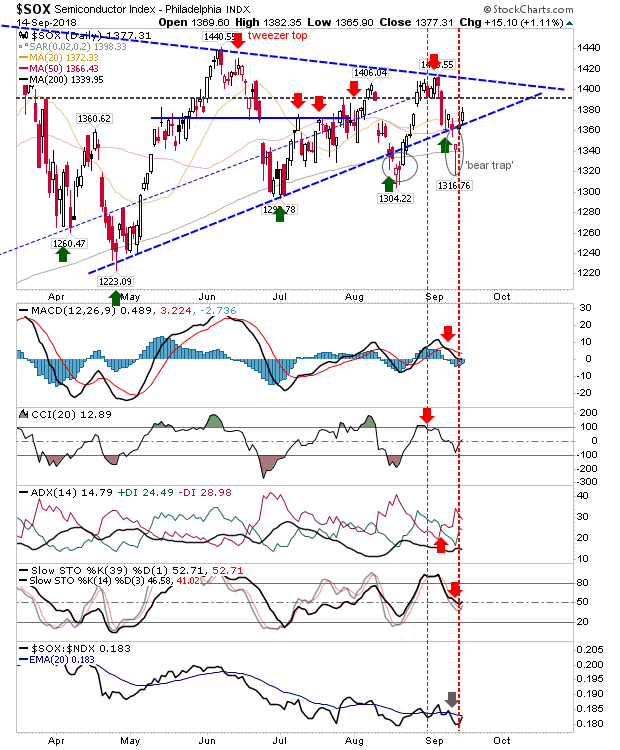 The Russsell 2000 had a more low key day with a modest gain, enough to diffuse the series of weak doji days although the index is underperforming against the Nasdaq and technicals are mixed with bearish signals for the MACD and ADX. 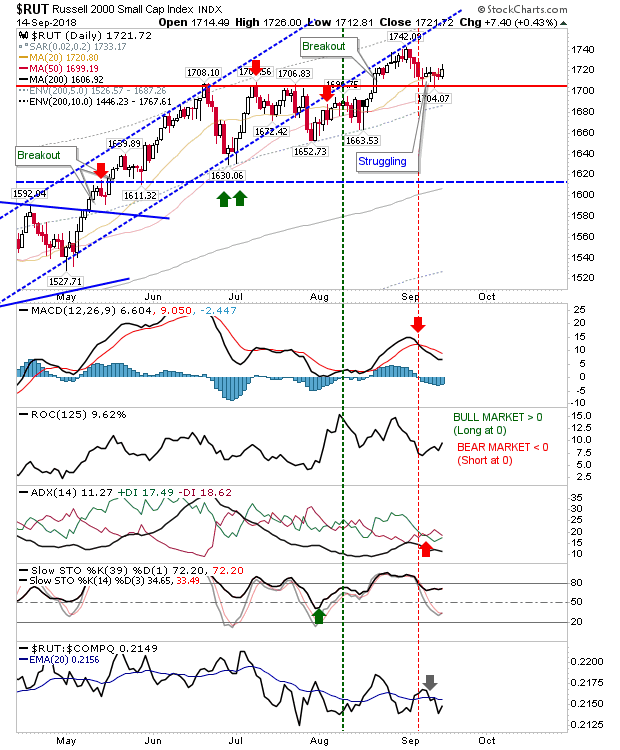 Other indices didn't have a whole lot to report for Friday.  The S&P finished with a narrow range doji as relative performance remained positive despite a small loss. 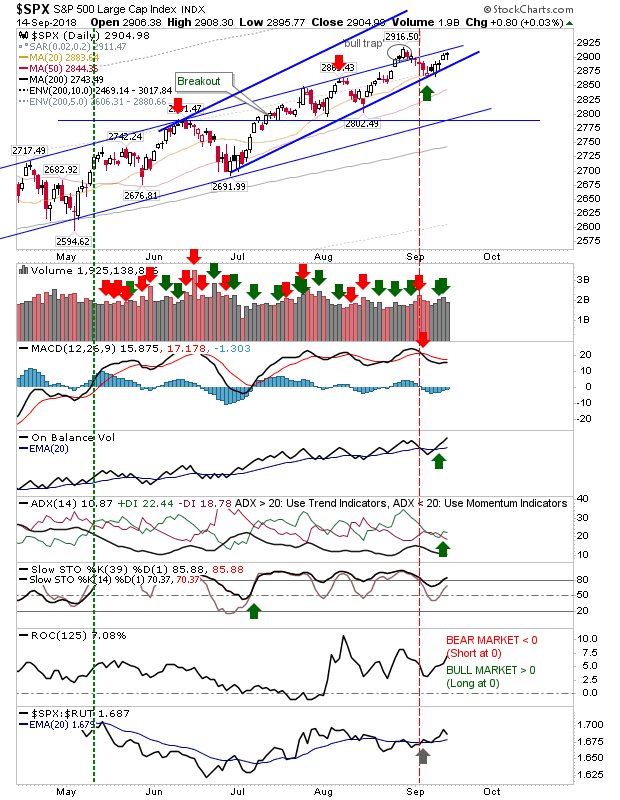 The Nasdaq also closed wih a doji on mixed technicals but as the index is a few days from challenging prior highs it's underperforming against the S&P.  Let's see what Monday brings. 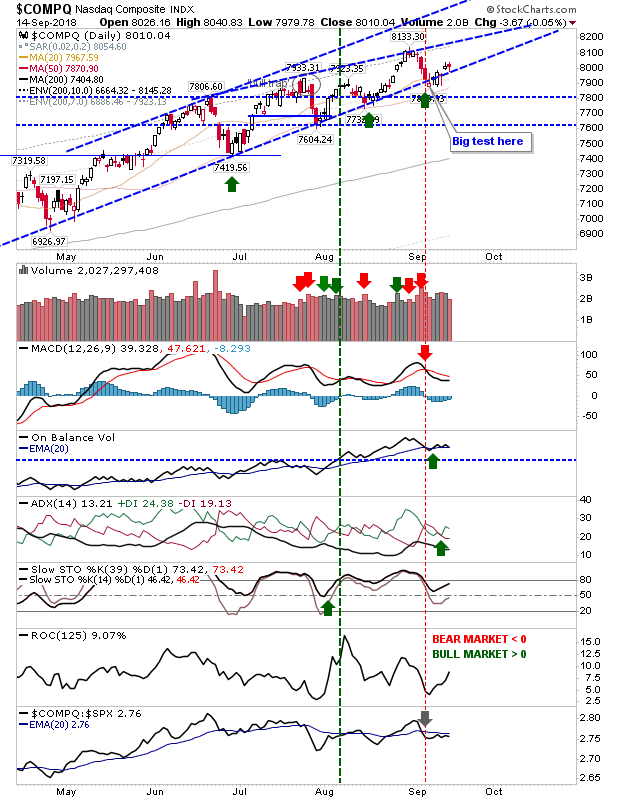 I haven't mentioned it in a long (long) time but volatility may be about to break out of its decade long underpeformance. How will markets react to this long needed period of chaos remains to be seen but Trump will probably be a catalyst for this at some level. 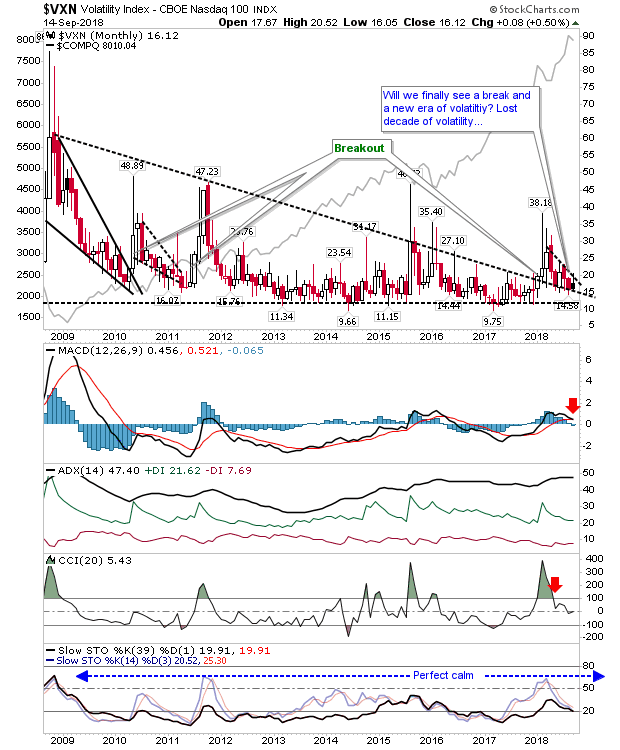 I'm not seeing much on the longer term charts - nothing to suggest bears are gaining control.  The only one weakening at a rate which suggests the end will come within the next 12 month is the 2-year bond yield curve; an inverted yield curve has preceeded the last two major sell offs. However, this is a slow burn chart and not something we can expect to see a change in the next couple of weeks or months. 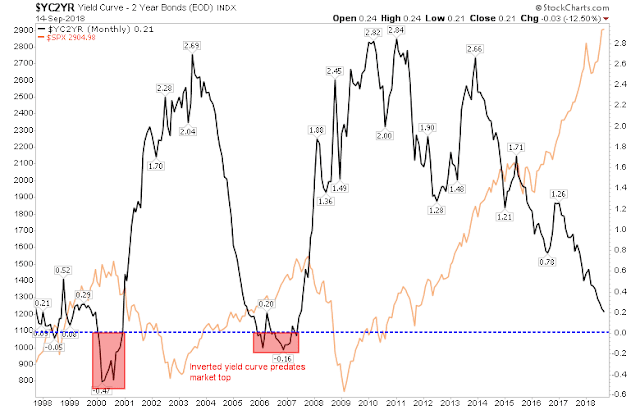 For tomorrow, keep a track of the recovery in Semiconductors and Russell 2000. If the former can continue to advance to triangle resistance it will help push the Nasdaq and Nasdaq 100 to new all-time highs.