August 24, 2009
Vacation season will be rounding off to a close soon. How will seasonal factors play in the weeks ahead? So far bulls have held control since the March lows, but will this change anytime soon?

Anthony Caldaro of ObjectiveElliotWave has penciled in a 5-wave structure with the third wave currently underway. If true then the fourth wave can't undercut the first (so S&P holds above 990) before a new high is made as part of the final fifth wave. 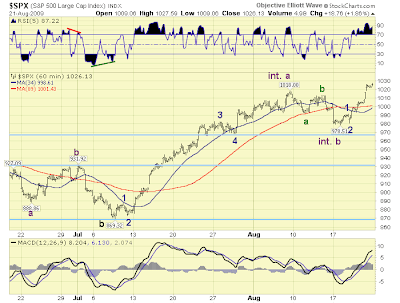 Yong Pan of Cobrasmarketview has a mix of bullish, bearish and neutral sentiment signals. I think the surprise here is that sentiment is not more overbought.

But a 'sell' signal in place? 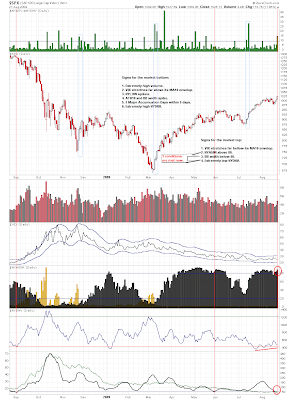 Another bearish wedge (a common theme over the past month or two): 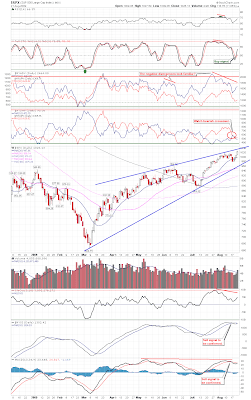 Gaps to fill continue to stack up: 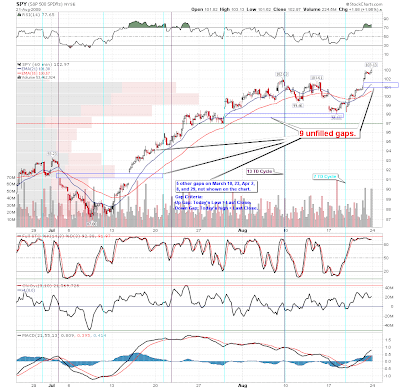 8/22 -- You can say what you want about being catapulted upward by a falling dollar and excess worldwide liquidity that has nowhere else to go, and you can rile about the excessive valuations in stocks right now, but the facts remain: equity indexes have gapped up through the short term purple downtrends now and a new short term upleg is in progress. Some of the blue minis actually accelerated due to the vertical move in a matter of minutes, but the hourlies all broke upward as well. There may be a retest of the purple as a corrective leg takes hold, but that is not an absolute.

The longer term charts come into play here again now. Green upchannels on the one-year charts are being approached again and could push higher (the FTSE actually pushed its green to a steeper slope already.) And the blue minis on one-year charts are still intact. (They may be the best indicators here as you cannot draw channels that wide on the shorter term charts.)

The VIX futures (nearly 5 pts premium in the Octobers) are a constant reminder that seasonal factors weigh heavily on the market in Sept-October).

8/20 -- Adjusting the purple short term channels that appeared to have broken, I was able to find alternate angles that still have the indexes in downchannels. Bear in mind that I am not trying to fit everything into a downtrend purposely to suit a bearish stance -- I'm trying to determine for sure that the current downtrends have broken or not. Bizarrely, all the major indexes AND all the sectors I track here are now ALL at the top of their purple downchannels, including gold, oil, and tech stocks. Such uniformity is rare.

They are so close that almost any upmove on Friday will have to be considered an upside break. A down move, on the other hand, could be sharp, as it will represent another downleg in the existing downchannel. 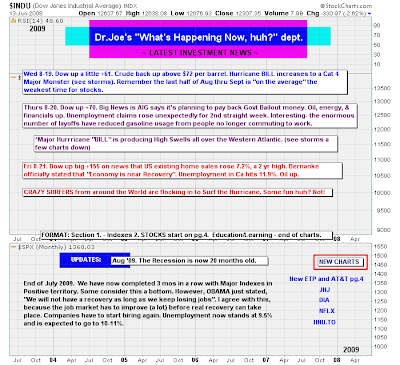 Will markets be watching the 50% fib retracement in the Nasdaq for leads? Will this mean large and small caps will make it up to this level too? 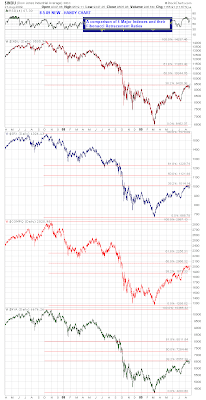 Will this end the corrective bull rally? 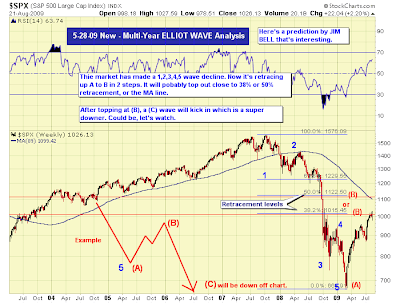 As a sidenote, oil to breakout? 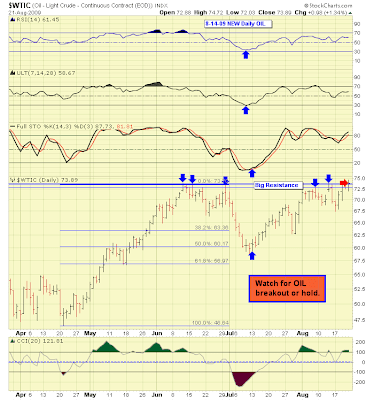 Finally, Robert New of TheInformedTrader has marked in the fail safe line for bulls: 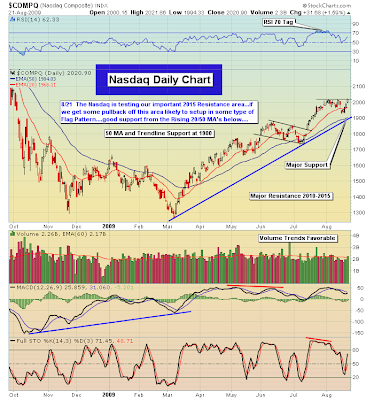