January 19, 2009
A busy week for the markets; have bulls done enough to avert a November low retest?

Yong Pan's weekly summary is not looking too green (green of a different kind really):

The S&P bottom watch is not looking very bottom worthy:

The break from the rising wedge looks more significant (and dominant):

I always get concerned when a bullish hammer fails to confirm; the candlestick for January has all the makings of a November low retest; bulls will hope for a close back at the 900 level by month's end to create a neutral doji, or up in the 950 range for a bullish hammer. 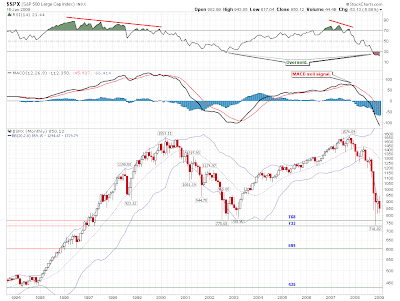 Pan also notices the first distribution day in a while and the prognosis isn't good:

Maurice heads with the cheery:

The Financials Derail The Rally

But let me be clear the bottom failure swings on the weekly charts are still supporting the November lows and the rally off those levels. If we do form additional right shoulders over the next three weeks or so with out doing further technical damage to the daily charts, then we may see the patterns play out. The 10- and 20day EMAs continue to crisscross back and forth, confirming the Aroon and the ADX , that this market is still trendless.

The damage in picture form: 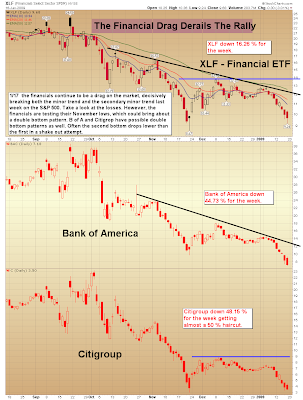 The complex inverse head and shoulders patterns are still in play on the daily charts, and we could be in the process of constructing some right shoulders. However, if prices reverse at the 918 level, we also have a bearish head and shoulders top formation. See the hourly charts for this pattern. Also, go watch the video. Ron goes into in depth analysis on these dueling patterns, which are mutually exclusive to each other, so make sure you go to thechartpatterntrader.com to watch the week-in-review video. Because both scenarios cannot be true, therefore, we must watch support and resistance to determine future price direction. Resistance near 918, and support near 815 must be respected on the S&P 500.

But I do think we will get an Obama rally next week. Whether it forms the right shoulders for a head and shoulders top or bottom remains to be seen. Study these two patterns on the daily charts and hourly charts on pages 1 and 2. 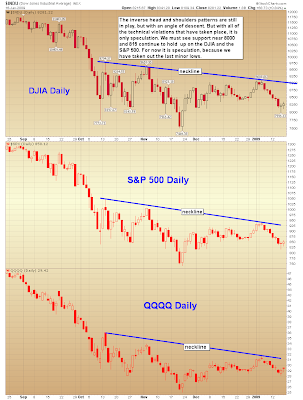 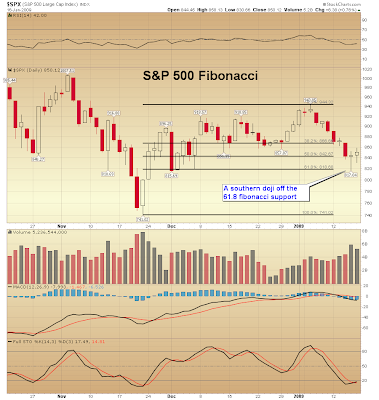 Richard Lehman has gone with broad, gently angled down channels (the slow killers):

1/17 -- What we now know is that Jan 6th represented the top of the countertrend rally from November's bottom. So, we are now backing off of that high and the longer term question is whether the longer term decline changed slope and is heading toward new lows this quarter or whether Nov's low will hold and we are in a long gradual climb back up. The long term charts show both scenarios in different indexes. Just for those who track history, the November low in 1929 did hold despite a similar rollover in January and the market clawed its way back to an eventual peak in April...from which it declined for another two years!

Meanwhile the short term tells us that the first leg of decline off that Jan 6th peak looks to have just ended as the red minis gave way to new upward blue ones on Thursday. Regardless of the long term picture, we should continue this little mini rally, with an anticipated boost from inaugural euphoria, but must remember that the larger short term channel is now down (purple) in most cases. If we can make this new mini last a while, it may give weight to the longer term scenario of '29-30, but right now I'm showing larger downtrends and I'll stick to that until broken.

By the way...I added two charts on DXO to watch crude now.

1/15 -- The red minis did pretty much break, though an upside mini cannot be drawn yet. I did, however draw the larger purple ST down channels that are the only option I can see on the ST charts. the longer term charts now say the overall move is down again and that any mini upward in the ST will take us up to another short opportunity

Finally, a chart from Howard Blackstein which says it all. Howard mustn't have the best eyesight as all those CAPS make my head spin!