December 01, 2008
Michael O'Leary has made a bargain basement offer for Aer Lingus. With oil prices down at 2007 lows the coming months should be 'better' for the industry - even if this only translates to 'less worse' than other industries during the recession.

From the Irish Times

Ryanair has launched a second bid to purchase Aer Lingus in an offer that values the carrier at €748 million, or approximately half the value of its first bid.

The €1.40 a share cash bid represents a premium of around 28 per cent over the average closing price of Aer Lingus shares for the 30 days to November 28th, 2008.

Ryanair already owns almost 30 per cent of Aer Lingus shares and said in a statement it is proposing a “merger of the two airlines into one strong Irish airline group under common ownership”. 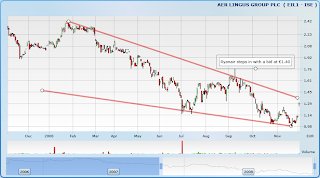 What could this mean for Ryanair's stock price? Since the start of the year the stock has traded within a fairly orderly downward channel. The past month has seen prices up near resistance of this channel - a good sign for a pending break from the channel. However, the market reaction to the deal may delay this breakout a little while longer. Buyers have been interested when Ryanair stock dips below €2.50 so sideline money may be waiting for another trip to this zone before taking the bait. My call reflects this pessimism going forward. 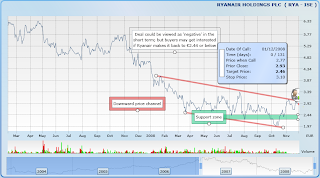