November 17, 2008
Another hectic week in a month full of hectic swings. What did the Stockchart.com ers have to say about it?

Yong Pan has the first of two sell signals emerging in the S&P.

Is BB width still a little frothy for a bottom (= too much volatilty)?

Pan outlines the difficulty markets will have to overcome to classify a follow through day; it looks to be a big ask for Monday (Futures down in pre-market). 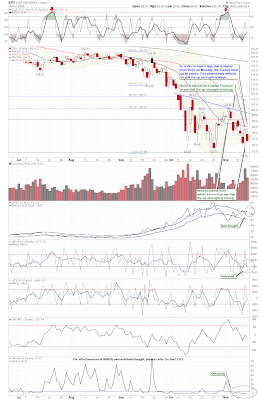 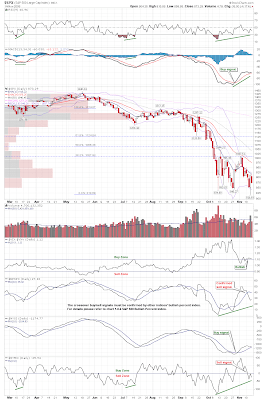 Maurice Walker has a long commentary which can be read by following his link. He highlights the Percentage of Stocks Above the 50-day MA as a key indicator for a bottom: 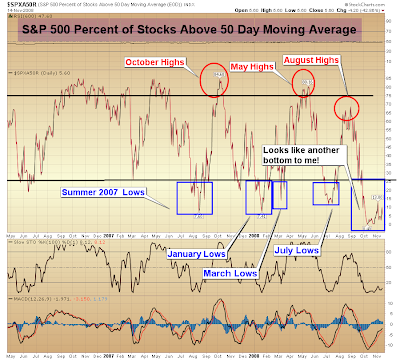 Maurice views Friday as a bearish inside day where I would view it as part of a bullish harami. Either way - the two-day highs have to be breached to negate one and confirm the other:

His comments on the MACD are important:

The MACD should be watched closely. The MACD histogram got a bearish triple M pattern (m-M-m) on the indice daily charts. That could cause the MACD to penetrate through it's signal line causing further stress on prices, allowing the bearish descending triangle patterns to run their course. Proceed with caution, this market isn't for the faint of heart. Don't play it unless you can afford to loose the capital you are placing at risk. If the MACD gets a bearish crossover, expect the bears to run roughshod over the bulls.

His charts on the indices ETFs tell a good story:

The Aroon 'buy' trigger is disappointing - 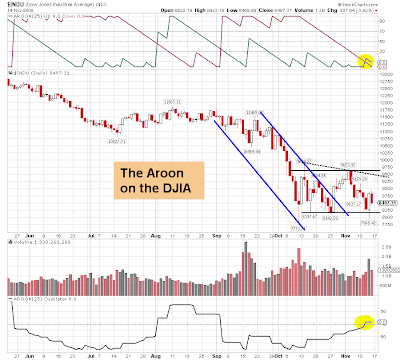 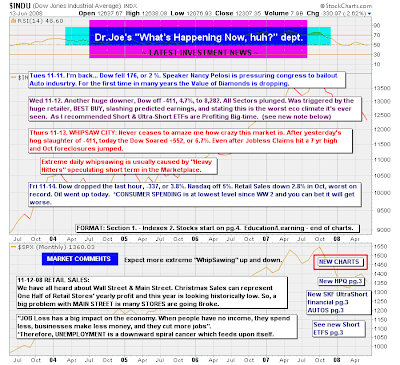 I wonder what this means for support in the retail index. I hadn't realised it was back at 2003 lows: 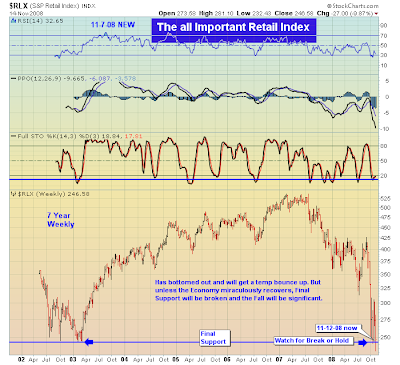 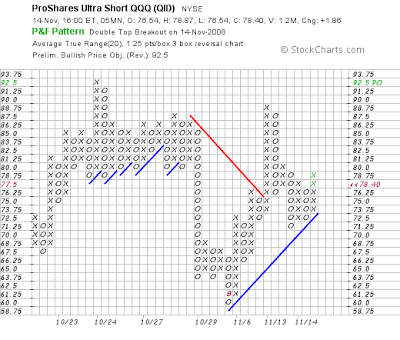 11/15 -- First, I want to make a quick plug for a fellow chartist who is offering a free look at his subscription web site through Nov 21st. A lot of you like my charts because they are simple and easy to read. You'll also find those qualities evident at TheMarketMessenger.com, run by former Hall-of-Famer Asher Pinto. Asher's done an excellent job of giving clear, uncomplicated information on his site and has always been a skilled chartist. He also offers both stock and option advice -- something most other chartists don't do. This is a great opportunity to see what he does at no charge -- you don't even need to register to check it out.

Now for more sobering news...we've had some precision channel magic now as the indexes bounced off lower short term support lines, blew through upper resistance lines, and came back and retested those breaks. We can thank the short coverers for that. But, importantly, I now see some things that indicate those breaks MAY NOT BE A NEW MINI UPTREND AFTERALL, but may be a slope change that is still heading lower.

I pointed out yesterday that the larger channels (in black) on the hourly charts still had more upside room. I now believe we may NOT go back up to those upper channel lines just yet. Several reasons. First, on the broad index charts, there is no clear mini upchannel anywhere. Second, if you look at the XLF and XLK hourly charts, I drew in a red channel indicating a slope change rather than a new uptrend. That's what may be happening in the broader indexes, but that is not as visible yet. Lastly, the fundamentals are simply awful and are likely to get worse. GM will take center stage now and regardless of whether they are saved or go under, it will be a really lousy scenario with huge negative consequences for the corporate sector. Their unfunded pension liability alone will wipe out the entire Pension Benefit Guaranty Insurance fund.

Anyone want to play contrarian? Not a happy bunch this week...

Get the Fallond Newsletter