August 25, 2008
Not much ado in the market as we head into the final week of vacation.

Richard Crockett leads with the S&P bullish percents doing their best to roll over. Although I'm not sure what he is using as his trade signals unless he hasn't marked in the recent whipsaw signals. 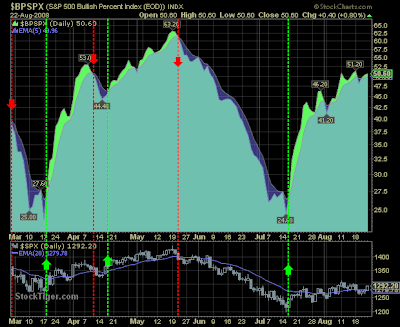 The S&P is in bear market territory:

But have Gold miners found a W-bottom? 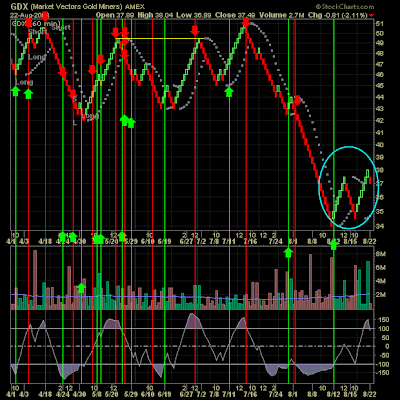 The voice of volume reveals that the market is now rising on declining volume.

I like his 15-min QQQQ chart. Will we see the head-and-shoulder pattern come to fruition: 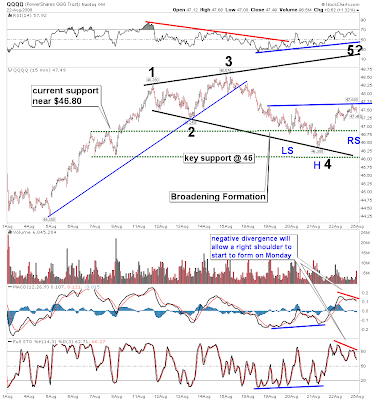 With a matching play in the 60-min window: 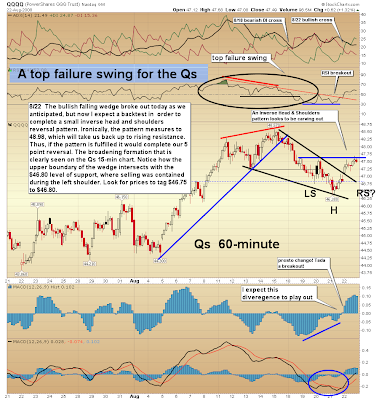 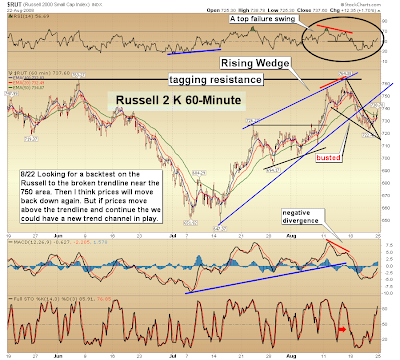 Over the long term:

If the QQQQ falls back to test the $45.50 to 46 area, we could see both the DJIA and S&P 500 make a test of the July lows. It is my personal believe that rather than that, they will just put in a higher low, but know one knows for sure.

The downtrend on QQQQ weekly chart is still in play, getting what looks to me like a dark cloud cover candlestick this week. But the Russell has already broken its downtrend.

Look for oil to spoil the bull's party:

I think oil continues to be the wild card. It dropped dramatically on Friday and the stock market rallied. WTIC and XLE just broke out of bullish falling wedges last week and they could bounce off this 61.8 Fibonnaci retracement level. The daily charts look very oversold. But Fed Chair Bernanke was taking about how bad the economy was and a slowing economy will cut demand for crude allowing prices to drop. Look how much crude oil has dropped just since Presidiet bush has been putting the pressure on Congress to lift the ban on off shore drilling.

But if oil does make a recovery in September we could see volitility on rise in the stock market. The VIX has formed a bullish falling wedge with a bullish divergence on the stochastic and a rising histogram. So lets watch is closely for directional clues.

I think Monday we could see prices sell off and then an advance could resume for the rest of week. Once prices move higher a bit, I think we could see selloff that will allow higher lows to put on the QQQQ and Russell 2 K. I also expect the DJIA nad S&P 500 to put a higher low. However, those two averages could still test the July lows. thechartpatterntrader.com

Yong Pan is also concerned with the low volume rally. Two new bear signals and one new bull one: 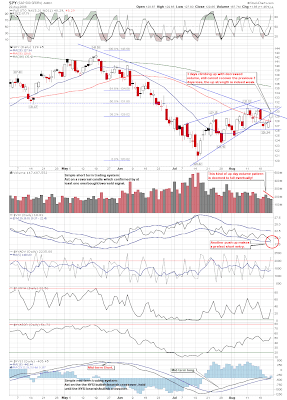 The Reed summary is in. Looking at gold as a 'buy': 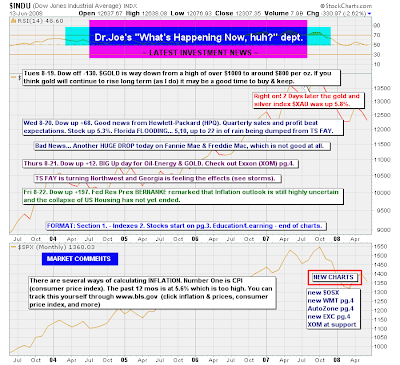 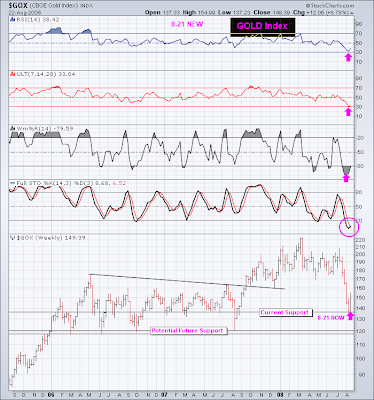 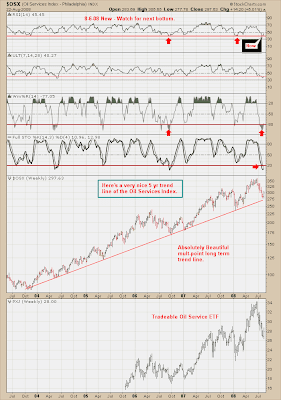 8/23 -- Today's up move surprised me and it looked like the purple downchannels were history, particularly in the large caps. But when I analyzed all the charts at night, I found it more likely that the purples just widened and flattened, but are still active and still heading lower. Note the perfect touch of the former green channel on the Dow as a delayed retest. Also note that VIX touched major support. I understand the Sep and Oct VIX futures still havelarge premiums, meaning the big boys are betting on another big selloff coming.

The flattened purple scenario allows for a bit more upside in both small and larg cap indexes, but then a possible hard reversal. I'd stay cautious here. Oil stocks have backed off as expected.

8/21 -- The large caps moved higher in their countertrend short term rallies. They will soon hit the purple downtrend lines and likely roll over again to ther downside. But it is the situation in the small caps that concerns me. They broke the green uptrend lines a couple of days ago and are also now in short term downtrends noted in purple. Today, they all came back up and retested their green lines which further confirms their downtrends. What concerns me is that the purple downtrends have been drawn somewhat flat, placing the indexes (Naz, QQQQ and RUT) all in scenarios that suggest a bounce upward within those downtrends starting to occur. But there is a much more bearish interpretation on them that I haven't drawn. The Naz and the RUT are showing possible breaks on the minis of their one-year charts, so this bearish scenario bears watching. If any of the three small cap indexes falls below the short term purple, then the more bearish scenario will be in effect. It's worth watching.

Meanwhile, XLE is up nearly 10% in 3 days - wow! I wouldn't chase it though, as it is due for a pullback that would help flatten out the up channel to something more sustainable.